This is another FridayFictioneers post, though it has nothing to do with the prompt by Madison Woods. The prompt sparked absolutely nothing in me this week. I was a bit disappointed by that. But, instead of writing nothing, I decided to continue the tale from last week a bit, as much as 100 words will allow anyway. You can find last week’s tale -> here <- if you don’t remember it. I even created a crude piece of “art” to go along with the new tale. Enjoy! 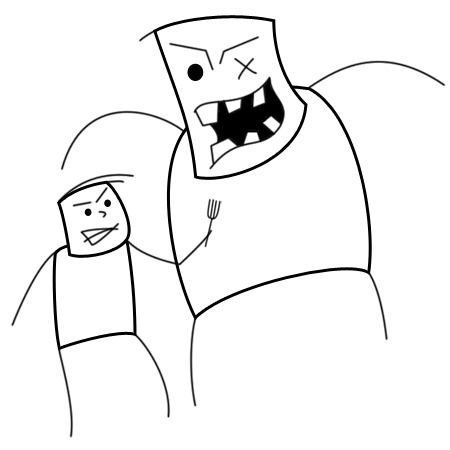 Tales of the Traveler – The Ogre

That ogre gave me nothing but grief for three weeks after I took his eye. He chased me through the swamps of Ganduugan and over the treacherous Kalloleese mountains. He caught up when I stopped to rest at the Nagging Mule over in Chesbrooke. Bastard was slow, but persistent as a fly on stink.

The bloody oaf yanked me right out my seat. I lunged for his good eye with my fork. He, naturally, took exception. That tavern took one hell of a beating during the scrum, as did I, but like I said before, ogres aren’t the smartest creatures.

Like Loading...
This entry was posted on Thursday, June 7th, 2012 at 10:12 AM and tagged with drabble, flash fiction, Friday Fictioneers, story and posted in Stories, Writing. You can follow any responses to this entry through the RSS 2.0 feed.
« This offer will expire in 4000 days! Act now before it’s too late!
Failing like a boss »